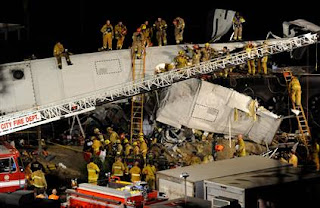 LOS ANGELES - The probable cause of the collision that killed at least 18 people was the failure of a Metrolink engineer to stop his train at a red signal, a spokeswoman for the Metrolink commuter rail service said.

Metrolink spokeswoman Denise Tyrrell said Saturday the engineer worked for a subcontractor that has been used by Metrolink since 1998.

She said she had no further details about the signal's location and wouldn't say if the engineer had survived Friday's crash. Emergency crews found more victims, boosting the death toll to 18.

Mayor Antonio Villaraigosa said Saturday that the number of injured remains at 135, with 81 people in hospitals.

About 250 fire department personnel and 200 police officers were on the scene in the San Fernando Valley near Los Angeles before dawn Saturday.

A Los Angeles County coroner's official says several more bodies remain in the wreckage of the Los Angeles commuter train that collided with a freight train in addition to the 18 confirmed deaths already announced.

Assistant coroner's chief Ed Winter said Saturday that recovery crews still have not been able to get into the lower level of a mangled two-level Metrolink passenger car but they can see several bodies.

During the night, the teams used hydraulic jacks to keep the passenger car from falling over and other specialized rescue equipment to gently tear apart the metal.

Firefighters put out a fire under part of the train and pulled people from the passenger car, which was rested on its side with the Metrolink engine shoved inside it. Two other Metrolink cars remained upright.

The engine of the Union Pacific freighter was left on its side, its nose against the Metrolink wreckage. The rest of the freight train was accordioned behind it. Fire Chief Douglas Barry said heavy equipment was brought in to take apart cars, including one that had an unknown number of victims still trapped inside.

“This is the worst accident I’ve ever seen,” Mayor Antonio Villaraigosa said. “Clearly the injuries are going to mount and so are the fatalities.”

Dr. Marc Eckstein, medical director for the city Fire Department, said 135 people were transported to hospitals — about 85 of them in serious or critical condition. Police Lt. John Romero said the death toll could be about 20.

In the initial hours after the disaster, firefighters treated the injured at three triage areas near the wreck, and helicopters flew in and out of a nearby landing area on medical evacuation flights.

‘Blood was everywhere’
Rescuers worked atop the wreckage and through breaches in the passenger car to reach victims. Dazed and injured passengers sat on the ground and milled about on both sides of the tracks.

Leslie Burnstein heard screams of agony as she ran through a haze of smoke toward the twisted train wreckage where dozens of bloodied passengers were still trapped inside the cars.

She pulled victims out one by one, some weeping as they looked about at the scene of destruction.

“It was horrendous,” said Burnstein, a psychologist who saw the train crash from her home. “Blood was everywhere. ... I heard people yelling, screaming in pain, begging for help.”

A male passenger told KNBC-TV he boarded the Metrolink train in suburban Burbank and was talking with a fellow passenger when the crash occurred.

“Within an instant I was in my friend’s lap. It was so quick. It was devastating,” he said. The man was visibly injured, but able to walk with the aid of firefighters.

Head-on collision
Metrolink spokeswoman Denise Tyrrell said the Metrolink train left Union Station in downtown Los Angeles and was headed northwest to Moorpark in Ventura County. The trains collided at about 4:30 p.m. in the Chatsworth area of the San Fernando Valley.

“I do not know what caused the wreck,” said Tyrrell who broke down crying and was shaking. “Obviously two trains are not supposed to be on the same track at the same time.”

Union Pacific spokeswoman Zoe Richmond said it is common in California for freight and commuter trains to share the same track.

“You see it a lot in California where commuter trains share tracks with freight trains,” Richmond said, adding she couldn’t speculate about the cause of the crash.

The crash happened in an area where the tracks form a “U” shape, about 2,500 feet wide. At the top of the bend is a 500-foot long tunnel that runs beneath Stoney Point Park, popular with climbers for its large boulders.

On the north side of the tunnel, there is a siding, a length of track where one train can wait for another to pass, Tyrrell said.

NTSB to head investigations
The federal investigation into the crash will be headed by the National Transportation Safety Board, said Steven Kulm, a spokesman for the Federal Railroad Administration. The FRA will conduct a review of whether any federal rail safety regulations were violated, he said.

Asked how the two trains ended up on the same track, Kulm said, “We are nowhere near having any information on that.”

Prior to Friday, the worst disaster in Metrolink’s history occurred on Jan. 26, 2005, in suburban Glendale when a man parked a gasoline-soaked SUV on railroad tracks. A Metrolink train struck the SUV and derailed, striking another Metrolink train traveling the other way, killing 11 people and injuring about 180 others. Juan Alvarez was convicted this year of murder for causing the crash.

© 2008 The Associated Press. All rights reserved. This material may not be published, broadcast, rewritten or redistributed.